After xrays and an MRI, The foot pain that I have been dealing with for several months finally had a diagnosis.

Apparently since late summer, I have been running on a fractured sesamoid bone in my left foot!  Yes, I ran 4 half marathons on a broken foot, 2 of them being my fastest ever!  That also does not include all of the training miles, strength training and teaching 2 cycling classes a week.Now that I know what I am dealing with, I am trying to figure out how I managed to do all of that! Fast forward about a month… the Madison Marathon was supposed to be marathon #4. Once again, transferred to the half, as I knew that I was not going to be able to complete 26.2 miles with a strict 6 hour cutoff.  I can fake it/push it through the last 6 miles of a half marathon… but there is no way that I can fake it through the last 19 miles of a marathon!  I ran that 13.1 miles with another great friend who help make sure I made it through those miles, even once my food started hurting.

I will be honest – I kept my cool during the conversation with my PA, but when I got off the phone, it all hit me.  Telling a runner they are dealing with an injury is one thing… telling a runner they may not run for up 60 month is not too far short of a death sentence.  I spent the next 20 minutes or so wrapping my head around what I was told and then made the call to set up my next appointment.  With the foot specialist.  I knew that Dr Anderson was tough to get in to see, even with a referral, but now that I had a referral from his PA, I was able to get in the 1st week of January (much better than the Mid March it could have been with the referral from Chad).

It wasn’t until I got home that I realizes just who my new foot specialist was!  As I was scrolling through Facebook, I came across THIS article that was shared by Bellin Health, originally posted by EPSN!  I knew that Dr Anderson was good, but I didn’t realize to what extent!!!  If Cam Newton and Marcus Davenport trusted Dr Anderson to get them back on the field, I am pretty sure he can get me running again! 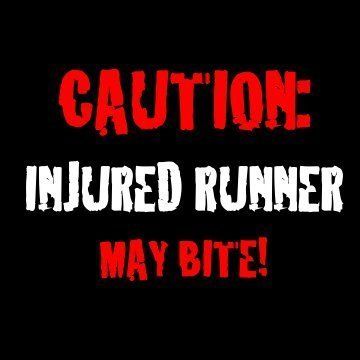 So now, as I sit there and try and get used to my new “normal” (at least for the next several months), I know that I need to find other outlets for stress and fitness, since I can’t just go out and run 5 miles whenever I need it.  I also am realizing really quickly that I need to figure out how to eat again…. I can’t eat like I am still running 20-30 miles per week!  The scale has already reminded me of that since I have not run since Madison in November!

Over the next few months, I plan on using this platform to document my road to (potential) surgery and then recovery.  This diagnosis but my slowing me down and keeping me from getting closer to some of the goals I have set, but it is NOT going to stop me!  I WILL find other activities to keep me moving, and once I can run again, you can be guaranteed that I will be there.  It is going to be a slow process, but slow it better than nothing!

The Crazy Hamster may be down, but she will not quit!    Here’s to coming back stronger on the other side!