Several years ago, when I discovered running skirts, I wasn’t really sure how comfortable that would be.  Until I gave them a try.  Once I found the right ones, I was hooked!  Skirt Sports was the clear winner, but that’s a whole different post.  Today I’m here to tell you that, although I still love my skirts and wear them whenever I can, running in a dress proved to be a game changer! 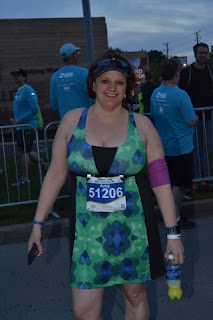 When Skirt Sports announced their two new dresses, I knew I had to give them a try.  I was not sure if I would actually like running in them, but if nothing else, this seemed like a great option for days up north when we head out to explode waterfalls, do some hiking and just hang out with the family at the lake!

My Electric dress (affiliate link) arrived about a week before I left for Indy and it fit perfectly!  I debated between ordering the Emerald City print or the solid black.  Normally, I ended up going more conservative and would have ordered the black on… but I decided to go out on a limb and order the Emerald City.  I am so glad that I did!

From the time I first put the dress on, I could tell it was going to be very comfortable.  My biggest concern was that it was not going to have enough support on top.  For everyday wear, I knew it would be fine, but was it going to be enough to carry me through a run.  It’s no secret that I need a little extra support up there. 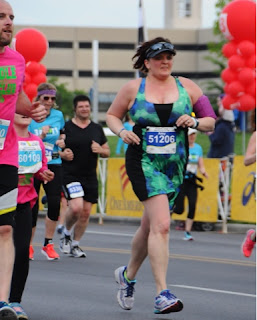 I debated for a few days on when I was going to actually try my dress out on a run.  Since the week leading up to Indy was a crazy one and my training calendar ended up getting compromised, I decided to break one of the cardinal rules of running – never try anything new on race day.  No new fuel, no new shoes, no new clothing…

But I then decided that since it was the 5k that I was signed up for, I was willing to take the chance.  I packed my dress.  Yes, I packed an extra skirt and tank for the race, just in case I changed my mine, but that never happened.  I was too excited to wear my new dress!

This was by far one of the most comfortable races every!  MY dress stayed in place, never seemed to ride up (or down) through my miles!   Now, although I was missing my shorts underneath (mainly for the pockets) this dress does feature a “cleavage alley” pocket!  plenty of room for some race fuel, and ID, hotel room key (we were travleing after all), and I probably could have even slipped my key fob in, if I needed to!  Nothing moved around, bounced out or even weigh the dress down!  WIN! 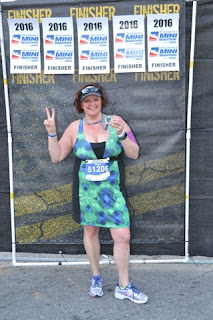 Now, don’t get me wrong, I love my skirts, the comfort, the pockets and everything else about them, but I love my dress!  Matched with a pair of the SS Redemption Shorts underneath (YAY – pockets!) this is a true winner!

The inaugural adventure of running a 5k was a success.  I will have to break this out on a longer training run before I adventure to running a half marathon in it, but after the first race, I have high hopes for this little gem!

So, now that I am sitting to write this post, and it’s actually a few weeks AFTER the debut, this dress has proven to be even more valuable than I originally thought!  The simple lines and cut of this dress make is so functional for so many different things!  No, I have not worn it to work yet, but I have wore it for random errands, but this weekend, I put it on, added a simple black sweater and headed to the local performing arts center for Chicago! Now that works for me!

In the end:
What did I love?
* Everything stayed where it needed to.
* Super comfortable
* Cleavage Alley pocket

Downfalls?
* I miss my pockets (but this is easily remedied with the addition of the shorts underneath)
* Due to the sizing on the dress and my need for slightly more coverage on top, I had to adjust what size I ordered.  Normally in SS tank, I wear a large and most skirts are a Medium, I needed to order an XL dress to fit right on the top.  not a big deal, just make sure you check the sizing charts and order accordingly!

Now, time to decide if I want to order this same dress in another color or do I try the other new style?! Such decisions!

Ready to try an Electric Dress (affiliate link)  for yourself?  Use my discount code CHD20 to save 20%!

As a Brand Ambassador for Skirt Sports, I obviously love their products.  All opinions above are my own and when you click on any of the affiliate links or banners on my page to place your order, I do make a small commission.