When you get the call to work the race expo for the 2nd largest half marathon in the country, you don’t say no!  After months of waiting, Tracie and I were ready to head to Indy for some fun!   6 hours on the road with this girl makes the time fly!  Listening to Beiber and Adele will never be the same again!
By the time we got to to Indianapolis, sleep was all that I had in mind!  But the Thursday morning, I was up early and ready to go, so I headed out for a running tour on the downtown area!  What an amazing, beautiful city!  I was out early enough to miss the crazy morning hustle and bustle.  Once I made it to the trail heading towards the zoo, it was just me, my thoughts and the small critters scampering around.  Next thing I knew, I needed to head back.  I had planned on 3-4 miles and by the time I got back to the hotel, I was at 5.5 miles.  One does not get “lost” on a run, they just discover new places to visit! 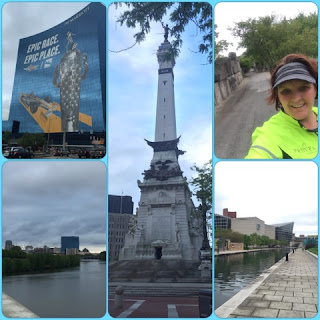 The rest of the morning and afternoon was spent  wandering around town, getting ready for the expo and all kinds of shenanigans in between!   The state capitol building, Memorial Circle and of course, No trip to Indy is complete without a stop outside Lucas Oil Stadium – of course the building was closed so we couldn’t get a peek inside, but anything was better than nothing! 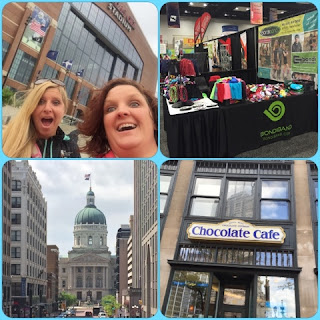 When we realized that we could actually visit the observation tower and get a birds eye view of the city, we knew where we were heading!  When we got there, we were greeted with 2 options.  1. purchase a ticket to take the elevator up 2. walk the stairs for free!  330 steps?  Game on!
OMG!  You don’t realize how far 330 steps is until you start heading up them!  But we were not giving up the fight.  In the end, we made it to the top in less than 5 minutes!  The view was well worth it!  After we caught our breath, took a few photos and enjoyed the view, it was time to head back down! 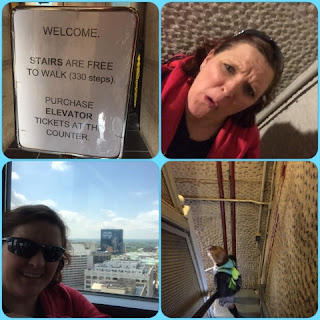 One of the awesome things about working the race expos is the awesome people I see and meet.  This year, I got to see  Boston Marathon champion and Olympic Medalist Meb, as he was in town to run the Half Marathon.  This year he was running “with the people”… starting at the back of the pack, to give everyone a chance to run with him.  They even had a contest at the Expo – guess how many people Meb was going to pass while he was running his Half Marathon.
My highlight of the weekend tho?  For all you American Grit fans out there, I had the opportunity to meet and chat with Brooke Van Paris (aka BeastModeBarbie) while she was shopping the booth!  What an amazing, down to earth, yet extremely inspirational woman!  Hearing her story, direct from her, is enough to inspire anyone!  This was her first road half marathon and she killed it!  Although I didn’t get a chance to get a photo with her while she was shopping, since I was so busy (one of the downfalls of working one of the most popular booths at the expo), but she sent me this photo, wearing one of the BondiBands that she picked up from the booth on Thursday!  Since the day I met her, I’ve been doing some reading on more of her story and what it took her to get to where she is, I am more than inspired!  Her Never Give up Attitude is amazing!
Side note: I also just found out that Brooke just qualified for the 2016 Obstacle Course Race World Championships in Canada this October!  Way to go Brooke!!! 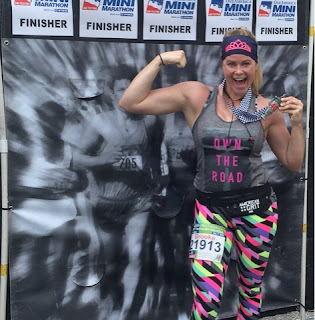 After the expo on Thursday, I met up with Tracie and we were on a mission to find dinner and then some sleep.  However, on the way to find food, we spotted a horse drawn carriage that we HAD to go take pictures of!  While Tracie was taking pictures of the carriage. I managed to capture this photo of a pup introducing himself to (hopefully) a new friend! 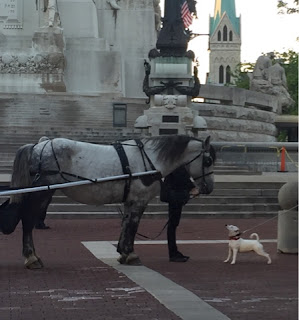 After working all day at the expo on Friday again, when the alarm went off at 5:15am for the race, I really just wanted to stay curled up in bed! I was tired!! But it was race day!  Before long, it was time to take the short walk to the heart of downtown to the start line! 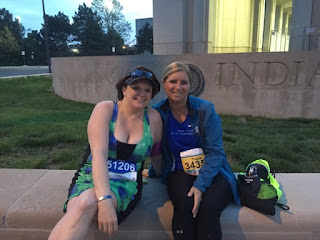 After running the half marathon here last year, it was exciting to be back at the start line again this year, even if I was “only” running the 5k.  Tracie was going all out and signed up for the Mini Challenge – running the 5k and then heading straight back to the start corrals to run the half marathon!  For those of you that know me, this would be a challenge that I normally would be all over.  However, since I was working the race expo for 2 days and being on my feet all day, I was not sure how my legs were going to be. so I opted just for the one (short) race. 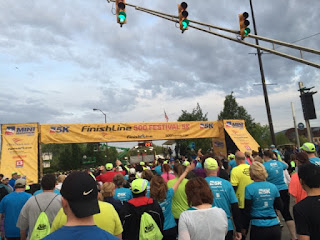 In the end, even tho I was running on limited sleep and tired legs, I was very happy with my race. I felt strong, the weather was perfect and I was running in a dress for the first time!  Just a week before this trip, I got my first dress that I ordered from Skirt Sports.  I was not sure how running in a dress was going to be and yes, I broke one of the cardinal rules of running – I tried something new on race day… running, wearing something that I have never worn to run in before. 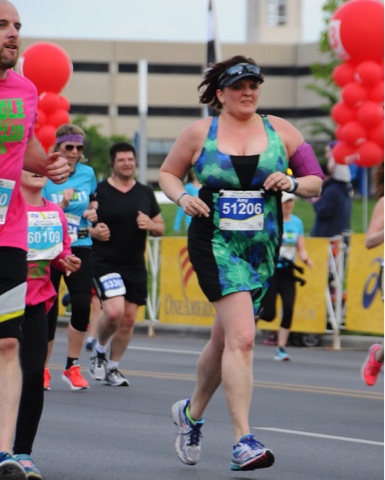 Thankfully my chance that I took paid off.  I think I was more comfortable running this 5k than I have for any other race!  Yes, I am a Ambassador Captain for Skirt Sports, because I love their products! I live in my SS whenever I can. I can tell that this dress is quickly going to become one of my go-to pieces of clothing this summer, both for running and every day comfort wear!