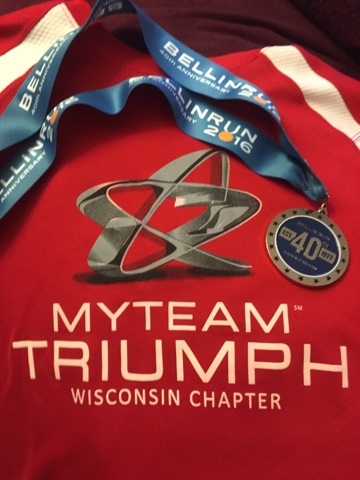 This past weekend marked the 40th Annual Bellin 10k Run.  The first event was held in 1977 with a total of 881 participants.  Since then, the race has grown by leaps and bounds!  Over the years this has grown to be one of the largest 10k’s in the country.  This year it drew in nearly 17,000 runners, including a field of elite runners from around the world! 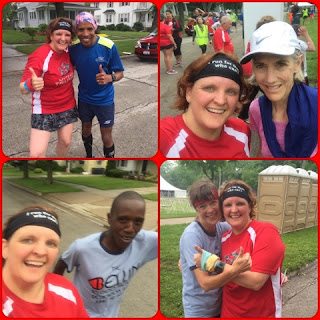 One of the high point of the weekend was the Friday morning kickoff fun run.  Run with Greatness.  This event is a fundraiser for myTeam Triumph (mTT) and gives anyone who attends, the opportunity to run along side some of the greats, such as Meb KeFlezighi, Joan Samuelson, Uta Pipng, Risper Gesabwa and more.  Sometimes, running at a sub 8 minute mile is worth it, just to get that epic running selfie with and elite runner!
Although this opportunity was priceless, it was not what the weekend was about!  The best was yet to come! 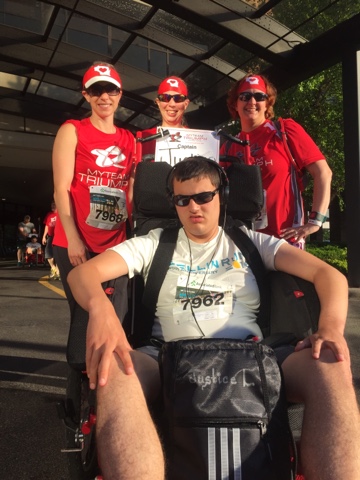 This year, after several years of volunteering for mTT, I decided that it was time to step up my game.  I was going join the fleet of Angels and run at least a few events.  This year one of the events I chose to run was the Bellin 10k.  Shortly after I signed up to run, my friend Lisa decided that she wanted to join me!  We had been looking forward to this weekend since before Christmas!
We were selected to run as Angels for Captain Justice!  We were also joined by another new Angel, Krista on this epic adventure.  Because we all have busy schedules, the 4 of us finally got to all meet each other less than a week before race day – 3 days before in fact!  But that didn’t matter, we came together for one reason…
To make Captain Justice fly! 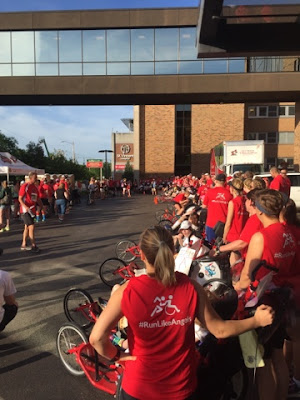 Bright and early (6:15am) Saturday morning, a sea of red converged in front of the hospital to prepare for the days festivities! This was history in the making.  This year, mTT had a record 40 Captains running this event!  Yes!  40 Captains for the 40th annual Bellin 10k!  Combined with their 120 Angels and countless other volunteers, that was a lot of red!
Everyone came together for a reason…  for a purpose… united together to run the streets of Green Bay on this HOT Saturday morning in June!  At the start of the race, it was already approaching 75 degrees and by the time we finished it was pushing 85! 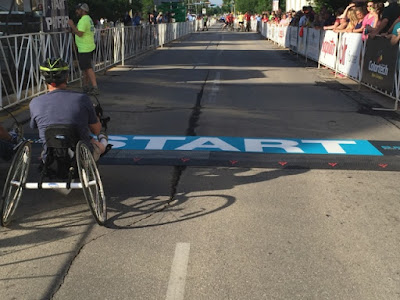 One amazing perk of running with mTT for the Bellin – our Captains get RockStar corral placement!  We start right behind the wheelchair division – in FRONT of the elite runners!  Most runners may never have the opportunity to “toe the start line” at a race, unless it’s a small, local race with only a few hundred people.  With the way that we were lined up in the staging area, as the sea of red moved around to the start line, Captain Justice ended up right at the start line!  The best seat in the house!  So not only was he starting ahead of the elites, he was one of the 1st athletes to cross the start line! 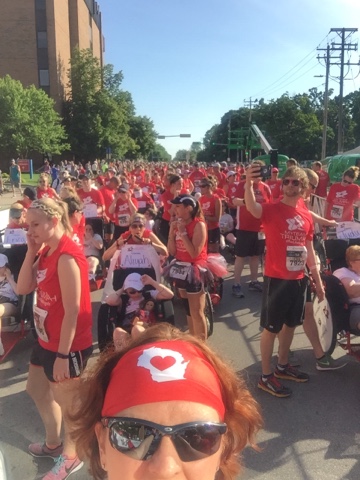 When I said, sea of red, I was not kidding!  This picture only give you a glimmer of how much red was out on the course!  Unless you have your eyes closed, there is no way you can miss this flood of Captains and Angels crossing the start line! 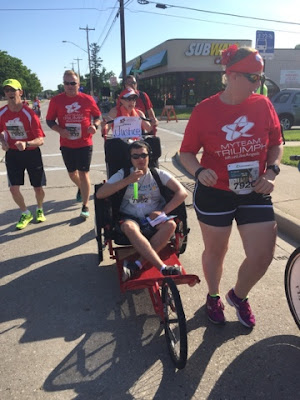 We headed out, knowing that we were going to take it easy, walk when we had to, and make sure that we had fun!  Another cool thing about the Bellin 10k is the community support.  Since the course runs through both business areas as well as residential streets, there are people out lining the streets everywhere!  Almost the entire course is lined with spectators, chilling in their front yards in lawn chairs to cheer on runners,  putting out their sprinklers so runners have a chance to cool off a bit, and even handing out freezie pops!  Yup, right before we hit mile one, there was a mom and her kids on the sidewalk passing out freezie pops to any runners who wanted one!  It didn’t take Justice long to say he wanted one! 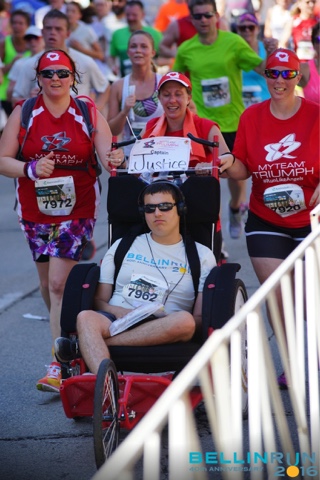 For the next 5 miles, we ran, we walked, we laughed, we played in sprinklers, we saw Green Bay Packer players (who were giving high 5’s as we ran by!) and more!  We all agreed that the one thing that kept us all running – Justice’s giggles each time we ran through a sprinkler!  This young man loves water and you could easily see that!  He would see a sprinkler coming in the distance, slide his CD player under his pad of paper and then cover the whole pile with his ziploc bag of markers!  He had this routine all figured out!  Before we knew it, we were at the park, meaning the finish line was just around the corner~ 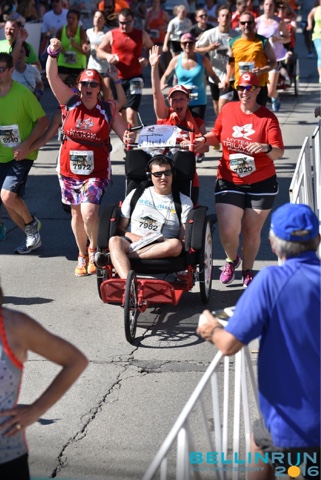 Huge perk again this year – FREE race photos!  Although we did not get many photos from on the course, finish line photos like this, are perfect to sum up what the weekend is all about!  Working as a team to make our Captain’s fly!  Approaching that finish line with the massive crowds cheering and hearing Justice name announced over the loud speaker was one of the most rewarding moments EVER! 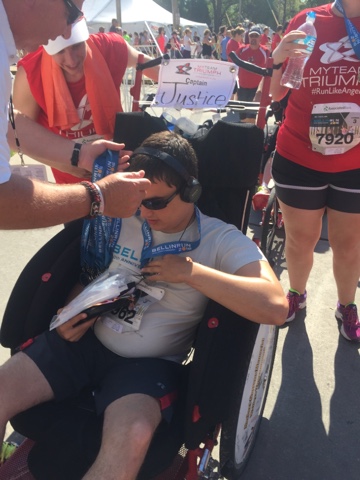 In the end, this experience was something that will never be able to be replicated.   No matter how many races I run with mTT, this one will always hold a special place withing, because it was the first!   I am already looking forward to training for the next one, but I am also not going to rush to put this day behind me! 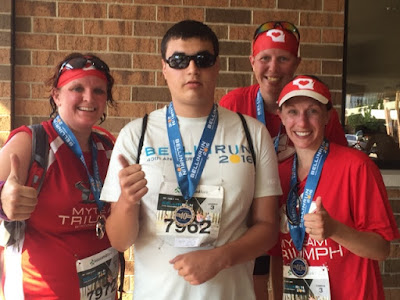 3 rookie Angels and one amazing Captain!  Thank you Justice for being the one to encourage us, motivate us and allow us to be your wings!   The weather may not have been what we wanted, but that was a small issue in terms of the magnitude of the experience! 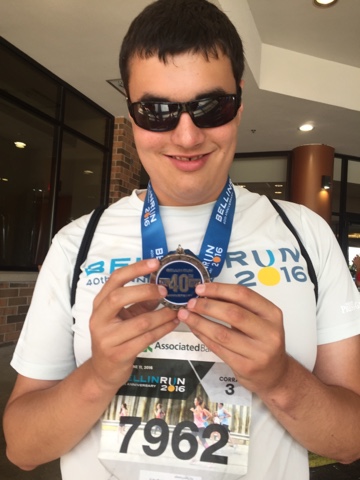 This right here, it why I do this!  Seeing that smile on Justice’s face when that medal was put over his head was priceless!   Not too long before this photo was taken, Justice’s mom made the comment that is is always so hard for her to get a picture of him smiling.
Apparently it just takes a race medal to bring one out!
Thank you Captain Justice!
So, if you are looking for something to do that just might change your life, this could be it!  The amazing relationships that are created and built through this fabulous organization are tough to duplicate elsewhere! Offering your time, energy and legs to give athletes the opportunity to do something that they would otherwise not be able to do, is something thing that I don’t think you can fully understand until you experience it for yourself!